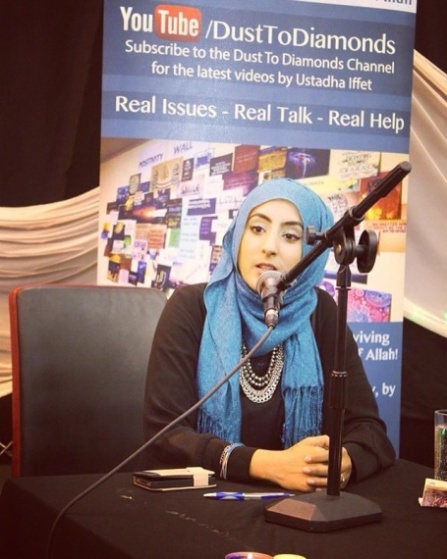 Ustadha Iffet Rafeeq is another member of the teaching staff, leading the female section at Kirkcaldy Central Mosque.

Following her passion to seek sacred knowledge, she began her studies at the age of 16 at the well-known seminary Jamia Al-Karam, Nottinghamshire, where she completed her Islamic studies and Classical Arabic, under the guidance from Shaykh Muhammad Imdad Hussain Pirzada and Hafiz Gul Muhammad Al-Azhari.

On completion of the classical ‘Aalimah course and achieving top marks consistently, she was appointed as a teacher and a spiritual counsellor for convert Muslims. Throughout her ‘Aalimah course, she also studied part-time with Shaykh Atabek Shukurov, and Shaykh Burhan Khandia.

After graduating from Jamia Al-Karam, she was offered a full-time scholarship to study at the prestigious, world leading Islamic university of Al-Azhar University in Cairo where she studied Arabic Grammar amongst other sacred Islamic sciences.

Upon returning to the UK, she was appointed as a teacher of Islamic Theology at City Hasanat College. It was during this time that she also completed her diploma in business management.

Throughout the duration of her academic teaching year, she continued her studies with Shaykh Zain ul Aqtab Siddiqui at Suyuti Institute. Ustadha Iffet Rafeeq also has experience in teaching in both Secondary schools and higher education.

After many years of work and service, she was again awarded a scholarship in Cambridge to study the Contextualised Islamic and Leadership studies in Cambridge Muslim College under the world renowned scholar Shaykh Abdal Hakim Murad.

Ustadha Iffet is the co-founder, and the chairwoman of Dust to Diamonds, a Da’wah and counselling programme tailored for modern day issues. She is also popularly known as an influential YouTuber. Nationally known as a public speaker, she travels all around the country to instil religion into the hearts of young women and help them tackle social, mental and cultural issues that disease our societies.