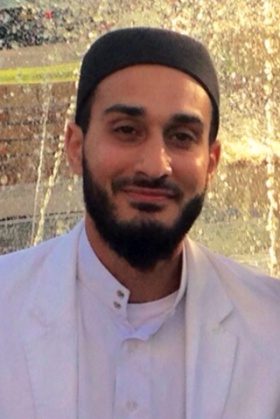 Seeking knowledge has never been as important as it is in the modern age. For pursuit of this sacred knowledge, Imam Mohammed Hammad began his Islamic education from a young age under the guidance of his scholarly father, Mufti Abdul Rasool Mansoor Al-Azhari.

In the year 2005, he travelled to South Africa to study under the leading intellectual and researcher, Mufti Akbar Hazarvi where he spent four years studying the classical Islamic and Qur’anic studies at Darul-Uloom Pretoria.

On completion, he returned to the UK and spent the next three years furthering his skills in Islamic Sciences & Classical Arabic under the guidance of Shaykh Muhammad Imdad Hussain Pirzada in Nottinghamshire.

After graduating in 2011, he then progressed to Egypt to study at the world renowned Al-Azhar University where he spent approximately three years. During his time there, he completed several courses which include the Diploma in Arabic Language, the Diploma in International Imam Training as well as the Diploma in Economics and Islamic Theology.

For a more rounded training, Imam Mohammed Hammad joined the Cambridge Muslim College where he studied the Contextual Islamic Studies & Leadership Course under the tutelage of Shaykh Abdal Hakim Murad, where key skills were explored in leading communities in the modern British society.

As a senior lecturer, he taught the classical Islamic studies program at the Oldham Islamic College during the 2013/14 academic year.

After discovering the lack of English-speaking Imams throughout Scotland, Imam Mohammed Hammad re-aimed his focused to serving the growing Muslim community in Scotland, in particular Fife.